Meteorological measurements have been made at the tower in Brasschaat since mid-1995. Meteorological data currently include vertical profiles of air temperature and humidity (HMP 230 dewpoint transmitter and PT100, Vaisala, Finland) in aspirated radiation shields at 2, 24 and 40 m, and wind speed (LISA cup anemometer, Siggelkow GMBH, Germany) at 24, 32 and 40 m. At the top of the tower, ingoing and outgoing shortwave and long wave radiation measurements are made by a radiometer (CNR1, pyranometer/pyrgeometer, Kipp and Zonen, the Netherlands). Rainfall is registered by a tipping bucket rain gauge (NINA precipitation pulse transmitter, Siggelkow GMBH, Germany). Two leaf wetness sensors (237F, Campbell Scientific, UK) are mounted on a 3m long boom at the 18 m platform and directed into the canopy. All meteorological sensors are sampled at 0.1 Hz and stored as half hour means on a data logger (Campbell CR1000, UK). A sonic anemometer (model SOLENT 1012R2, Gill Instruments, Lymington, UK) has been deployed on a mast above the tower, at 41 m since 1996.

Air quality at the level II sites has been measured using passive samplers of ozone (Passam AG) and ammonia (Radiello). Ozone samplers are exposed during the period April-September and are sampled on a fortnight basis. Passive samplers of ammonia are exposed throughout the whole year and replaced every month. 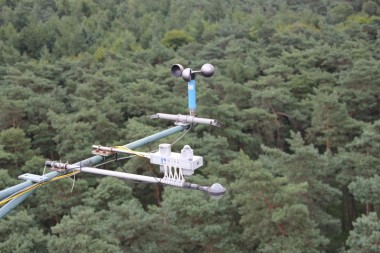