Two forest soil inventories have been conducted on the Flemish transnational forest vitality grid: one in 1993 and one in 2004.

A detailed profile description and classification following the World Reference Base for Soil Resources on the 10 Level I plots was made by J.H. Mikkelsen in 2006 during the BioSoil Inventory (Mikkelsen et al. 2008).

In 1993, the organic layer and 3 depth layers of the mineral soil (0-5 cm, 5-10 cm and 10-20 cm) at each observation plot were sampled according to a fixed procedure, resulting in 4 mixed samples per plot. Each mixed sample consisted of 36 subsamples, collected in the 4 quadrants of the plot. L, F and H layers were sampled together. Chemical analyses were carried out according to the reference methods of the ICP Forests soil Submanual (PCC – UNEP – UN/ECE, 1993), except for total nitrogen, for which Kjeldahl digestion was used.

These results can be partly explained by the nutrient poor parent material and the coarse soil texture in many plots; they indicate a high sensitivity to soil acidification. Other studies (e.g. Ronse et al., 1988), however indicated that a significant acidification occurred in the upper layers of Podzols and Regosols under forests before the start of the soil monitoring on these plots. 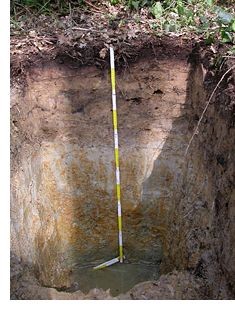