The Biological Valuation Map (BVM) is a uniform field-driven survey of the land cover and vegetation in the Flemish Region. The map is drawn at a detailed scale of 1/10.000. Land cover classes and vegetation types are defined by an extensive list of legend units. For fast and easy interpretation the survey is also translated into a biological valuation and depicted by a colour code on the map. 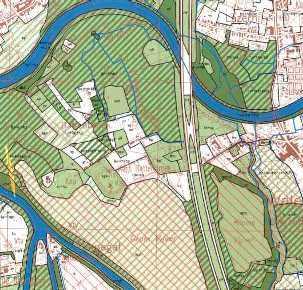 Some of the units only reflect information about the land use (arable land, urban areas, etc) but most of them describe vegetation types (dry heath, wet oligotrophic grassland, etc) often at the level of alliances (e.g. Filipendulion, Nympheion) but also at the level of vegetation associations (e.g. Ericetum tetralicis, Fago-Quercetum).  It is not uncommon in our landscape that natural vegetations are forced back to small relicts due to habitat fragmentation and habitat loss. A specific set of codes describes these smaller landscape elements (rows of trees, ponds, sunken roads, etc), if possible together with their vegetation composition.

Frequently, parcels contain vegetations and elements with different values (e.g. species-poor grassland with rows of trees). A mixed valuation is then assigned to that area (shaded green).

Because valuation is largely based on plant species and vegetations we add a red shading for areas of faunistic importance. This importance is determined by the occurrence of important populations of one or more RED LIST species of mammals, breeding birds, reptiles, amphibians, fishes, dragonflies or butterflies. Also, important numbers of wintering water birds or geese are taken into account.

Most of the Flemish surface is visited by scientists and technicians during an intensive field survey. Builded areas and intensively used agricultural zones are mapped in less detail.
To complete the mapping of such a vast surface within a reasonable time scale we normally visit an area only once. Nevertheless, we can reach an accurate result by mapping an area in the most appropriate time of the year, namely the flowering season of the dominant or typical species of a specific vegetation. The data is being digitized with a geographical information system. Aerial photographs, maps and other GIS layers are used to collect additional information.

The BVM is used in several legal texts and laws concerning nature conservation and environmental protection. In the legislation for reducing the agricultural nitrogen and sulphur emissions, the procedure for designating an area as a nature reserve, etc, there are multiple references to the BVM jargon. Also, in the framework of the European Natura 2000 network the BVM has proven to be very useful in obtaining a good idea about the location and the surface area of most habitat types (Natura 2000 habitat map, conservation status of Natura 2000 habitats).

In Belgium and especially Flanders we have a long tradition in mapping biotopes and habitats. In 1978 we started with a mapping project called the Biological Valuation Map. Originally, the BVM was an explicit demand of the government. Since then this map has become a primary tool for a wide variety of applications concerning nature conservation and environmental issues. Currently we are in the final stage of the second version of the BVM. The first version, which ran from 1978 to 1996, turned out to be a global overview of the biologically valuable landscapes . In the second version the list of mapping codes has been greatly extended, overall detail greatly improved and accuracy is higher due to more intensive fieldwork and better cooperation between the field workers.

In 2014 a new version of the Biological Valuation Map (BVM) and the Natura 2000-habitatmap was published. These new maps are now available online and can be consulted online.

In the map application there is a selection menu on the right. For the consultation of both maps you first have to choose the theme ‘Milieu en natuur’ in the selection list followed by ‘natuur’. There select the layers ‘Biologische waarderingskaart’ - versie 2 and ‘Kaartlabels Biologische waarderingskaart – karteringseenheden’ for the Biological Valuation Map or ‘Natura 2000 Habitatkaart’ and ‘Kaartlabels Natura 2000 Habitat’ for the Natura 2000-habitatmap. The layers are only visible from the scale of 1: 45.000 and beyond. Zooming to a municipality or street is possible using the search option.

Users with access to GIS-software (there is free GIS-software available online) can download both maps by downloading ‘Biologische_Waarderingskaart_en_Natura_2000_Habitatkaart_Toestand_2016’, available in both shapefile and GML-format.